European Association of Teachers of Serbia (EATS) was founded on February 28th, 2014 on a founding assembly held on the premises of the Sixth Belgrade Grammar School.  EATS is the first professional association under the wings of AEDE (Association Européenne des Enseignants), that gathers all national sections of all European countries.

More than 30 colleagues and enthusiasts from Belgrade, and other cities in Serbia – Niš, Šabac, Novi Sad, Požega supported the Memorandum of Association, as well as the Statute of the Association that inteds to introduce European heritage into national education system, but also give the opportunity to our colleagues and students to follow the trends of education in Europe.

Goals of the European Association of Teachers of Serbia are:

Those listed above will be promoted through seminars, projects, international cooperation and other forms of exchange with colleagues from European countries.

Mr.Rade Zejak, principal of the Sixth Belgrade Grammar School, was elected President of the EATS as the initiator of the idea stemming from successful contacts with the president of AEDE Mr.Silvano Marseglia.

Daily experience and needs point to close cooperation with European institutions and this is an opportunity not to be missed for the sake of the future of our education.

Colleagues present at the Assembly offered many positive and constructive suggestions for the beginning of the EATS’ work, and members commited to promote the idea in their region. 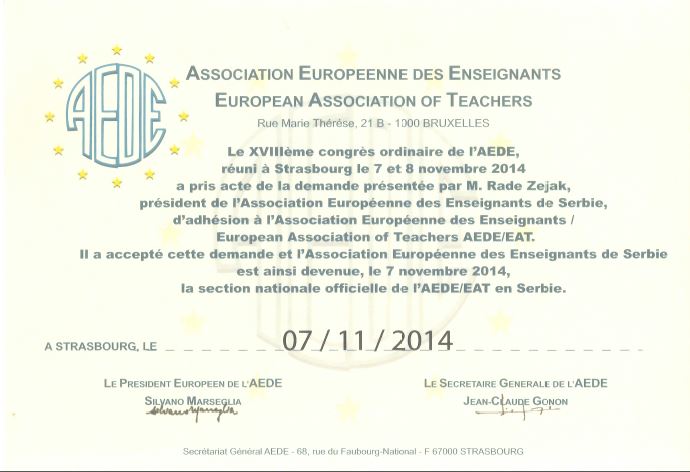